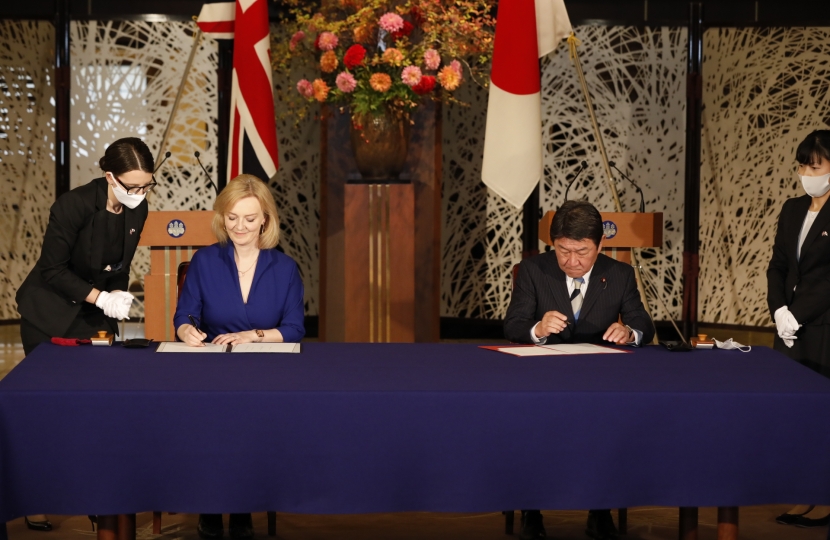 Businesses in Yorkshire & The Humber are set to benefit from the new UK-Japan Comprehensive Economic Partnership Agreement which was signed by Trade Secretary Liz Truss and Japan’s Foreign Minister Motegi Toshimitsu in Tokyo this morning (Friday 23 October). The agreement benefits fabrics and textiles, going beyond the previous agreement by securing new export opportunities for clothing manufacturers in Yorkshire & The Humber.

The deal could boost trade between the UK and Japan by £15.7 billion and drive economic growth, increasing UK workers’ wages by £800 million in the long run.

The British-shaped deal is the first agreement that the UK has secured that goes beyond the existing EU deal, with enhancements in areas such as food and drink, creative industries, digital and data.

This could benefit over 600 businesses in Yorkshire & The Humber that exported to Japan last year and help even more to begin exporting their goods and services to the country.

One Yorkshire business which is already benefiting from the Japanese market is Abraham Moon & Sons, who have been manufacturing luxury wool furnishings from their mill in Guiseley since 1837.

Following support from the Department for International Trade, exports now make up 50% of their total sales, with Japan the second largest destination, accounting for 20% of exports and 10% of total revenue.

The UK-Japan trade deal will support British exporters of leather goods and clothing through reduced tariffs. Across the UK, the textile manufacturing sector employs over 95,000 workers.

UK exports to Japan have been growing by an average of 8.2% year-on-year over the previous five years. With this free trade deal in place, potential benefits include better jobs, higher wages, more choice and lower prices for all parts of the UK.

• A boost for UK brands with protections for more iconic British agricultural products, from just seven under the terms of the EU-Japan deal to potentially over 70, including Yorkshire’s Wensleydale Cheese and English sparkling wine.

The UK stands firm in trade negotiations to ensure any future trade deals protect our NHS and maintain all existing protections for our high standards of food safety and animal welfare.

Once signed, the final agreement text will then be laid in Parliament for 21 sitting days for scrutiny under the Constitutional Reform and Governance (CRaG) Act.

A full parliamentary report will also be published on the agreement, providing an explanation of the CEPA, including any significant differences or enhancements between the UK-Japan CEPA and the EU-Japan Agreement.