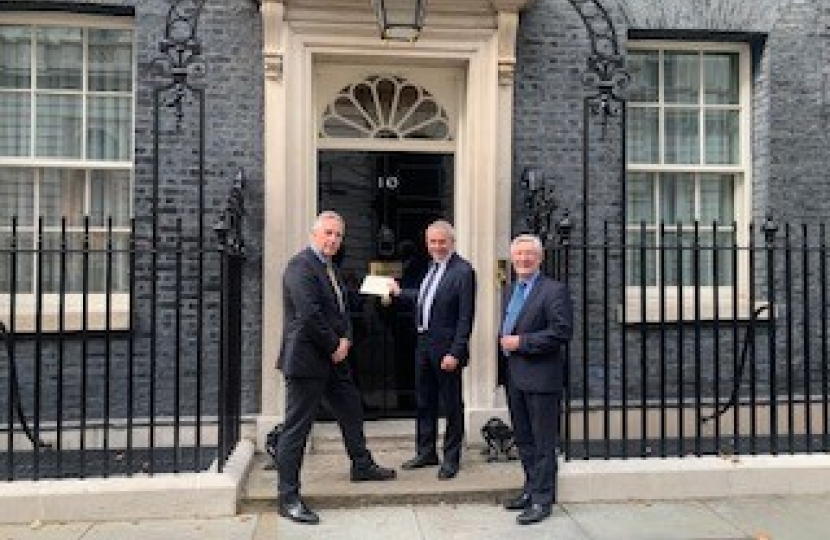 Cross-party MPs, including former Transport Minister and Chair of the Bus and Coach Industry APPG, Robert Goodwill MP, have hand-delivered a letter to 10 Downing Street calling on the Prime Minister to move faster on delivering his pledge to order 4,000 UK-made zero-emissions buses.

It states: “The UK has three world-leading bus manufacturers who have all invested in R&D to develop market-leading zero-emissions buses (ZEBs) and stand ready to deliver on your Government’s commitment to introduce 4,000 ZEBS by 2024/5.  However, from our discussions with the manufacturers, we understand there remains frustration by the slow progress that is being made in turning Government words into bus production orders.

“We therefore, on a cross-party basis, urge you and the Chancellor to take any steps possible to increase the funding allocation for the current financial year to allow further ZEBRA bids to progress, and also ensure the funding available for the 2022/23 financial year is significantly bigger. Only a much larger ZEBRA scheme next year will enable your Government to deliver on the 4,000 British-built zero emission bus pledge.”

Robert Goodwill, Conservative MP for Scarborough and Whitby, former Transport Minister, and Chair of the APPG for the Bus and Coach Industry, said:

“The Prime Minister made a pledge to deliver 4,000, British-made zero-emissions buses by 2025. Whilst some progress has been made, there is a long way still to go if this pledge is to be delivered. The slower the progress, the longer air pollution will remain high in our towns and cities, and fewer jobs are being created by our UK bus manufacturers.

“The Bus and Coach Industry All-Party Parliamentary Group will hold the Government to account on delivering its pledges to our bus and coach manufacturers. As we look to build back better, and greener, from the COVID crisis, zero-emissions buses and coaches have a key role to play.

“With a Spending Review coming up, now is the time for the Government to invest heavily in UK-made zero-emissions buses, creating jobs across the UK, and building a greener future for our bus network.”