A64 dualling is 'vital for the area' 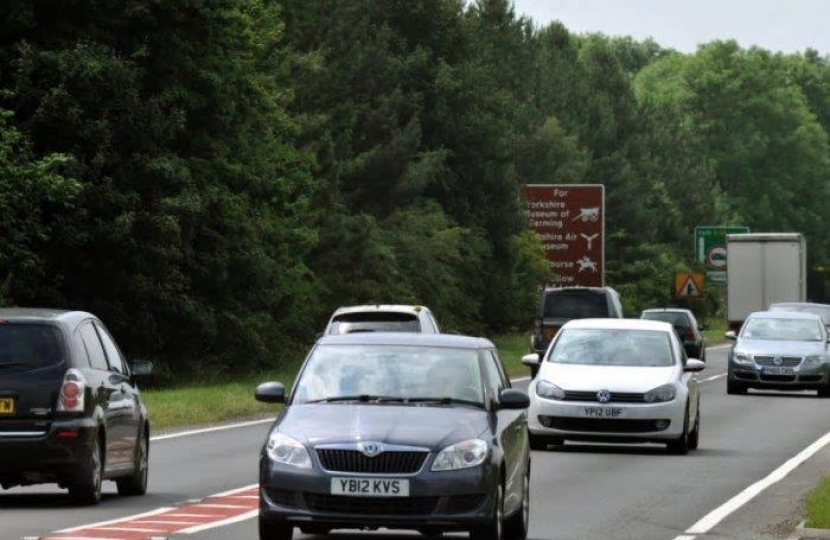 Action to improve the A64 traffic flow between York and Scarborough would help reduce the death toll, a high-level summit on one of the most notorious roads in Yorkshire.

Kevin Hollinrake, MP for Thirsk, Malton and Filey, said: "There are vital economic and tourism reasons why the A64 needs investment but there have also been tragic events.

"Couples crossing the road have died in similar circumstances recently - bringing deaths on the A64 over the past 12 months to 10."

The meeting of businesses and local authorities under the umbrella of a new campaign called the A64 Growth Partnership was organised by the York, North Yorkshire and East Riding Enterprise at the Food and Environmental Research Agency on the border of York and Ryedale at Sand Hutton.

The summit also heard that cyclists travelling to work at the science centre were also in constant danger on the route.

Scarborough and Whitby MP Robert Goodwill MP said there are "desperate" queues at times on either side of the A64 and that "the single most important investment that can take place is the dual carriageway all the way to Malton" to deal with the three hotspots - Hopgrove, the stretch to Barton Hill and to Huttons Ambo. He said: "There is already a £250m proposal by Highways England to extend dualling of the A64 from the Hopgrove roundabout area by 2025 but the single most important thing we can achieve is dualling to and from Scarborough. He added that the idea for a Rillington bypass could be presented on the basis that the quality of life needs to be improved for the villagers who face the A64 traffic flows daily.

Asked about the problem of creating a funnel of traffic nearer on the way into Scarborough after any proposed dual carriageway ends, he said that a relatively high percentage of vehicles leave the A64 at Malton for other directions.

Leading businessman Barry Dodd, chairman of the York, North Yorkshire and East Riding Enterprise Partnership, said: "This is vital for the area. The east-west connection is dire, rail and road.

"If you live in West Yorkshire this is the leisure corridor in which you will have sat in a queue of vehicles on the A64. "We need people to actively get behind this and push for dual carriageway to Malton. "

He called for businesses and the public to openly back the campaign, using social media as well as other channels.Major companies such as Kingspan, McCain and Sirius Minerals have given full backing to the A64 Growth Partnership.

Gareth Edmunds, of Scarborough-based Sirius Minerals said: "We need to rely on the A64 for staff, supplies and contractors and there is a need to make it a much better connection not just for us but for everyone and all businesses." Training companies also spoke at the meeting of the need to make transportation access easier to help staff recruitment.