Yorkshire MPs urge Highways England to think again about A64 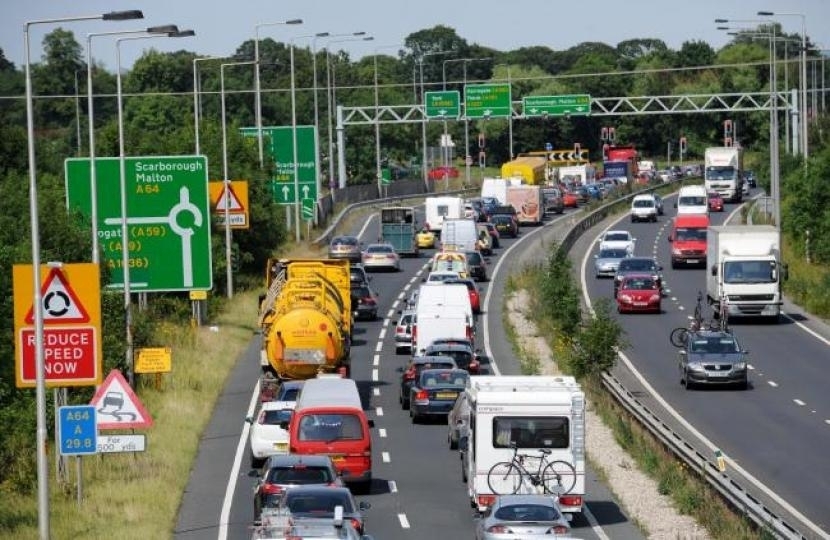 North Yorkshire MPs we have written to Highways England to express our “grave concerns” about its assessment of the need and value for money of a proposed dual carriageway between Hopgrove and Barton Hill. We are demanding urgent answers as to why the evaluation has gone from medium to low.

In the letter, signed by Robert Goodwill MP (Scarborough & Whitby), Kevin Hollinrake MP ( Thirsk and Malton),  Julian Sturdy MP (York Outer), Nigel Adams MP (Selby & Ainsty) and Sir Greg Knight MP (East Yorkshire), we say “It makes no logical sense that your initial business case concluded that further improvements to the Hopgrove roundabout resulted in better value for money than the dualling of the A64 carriageway between Hopgrove and Barton Hill”. We point to Highways England’s own A64 Hopgrove Feasibility Study which clearly made the case that “the root cause of the issues at the location is not related to the performance of the Hopgrove junction. Instead the delays that are observed on the approaches to the junction can be attributed to the blocking back from the merge from dual to single carriageway on the A64 approximately 500m north east of the Hopgrove junction.” In my view this confirms what everyone knows to be true; long lines of traffic along this stretch of the A64 are created by the bottleneck due to two lanes merging into one further along the A64 from the Hopgrove roundabout. This means making improvements to the roundabout alone will not solve the problem.

We also point out that these traffic problems which are already causing huge delays to our constituents, businesses and hundreds of thousands of tourists are set to get worse. The A64 Hopgrove Feasibility Study estimates that traffic will grow by up to 28 percent by 2035 and we argue that ”It is unthinkable that this situation would gradually worsen over a period of eleven years until we saw any improvement”.  We also argue that the dualling of the A1237 York Northern Ring Road, which is soon to be approved under the Major Road Network programme, the creation of thousands of new jobs by Sirius Minerals and GCHQ along with thousands of new homes in areas that rely on the A64 is expected to substantially increase the volume of traffic in the years ahead.

In our letter we are clear that the Hopgrove Roundabout flyover improvements ( £135m), which were originally proposed by Highways England, will not solve the long tailbacks and will continue to constrain the economic performance of businesses and tourism within the A64 corridor. We say that the dual carriageway (£120-£250m) which has the support of the A64 Growth Partnerships including the Local Enterprise partnerships, NYCC and Ryedale DC and businesses will significantly reduce traffic issues and journey times and make a huge difference to the regional economy. We are, therefore, appealing to Highways England to revisit its business case for the dual carriageway and recommend that it is included in the next road investment period from 2020 to 2025.