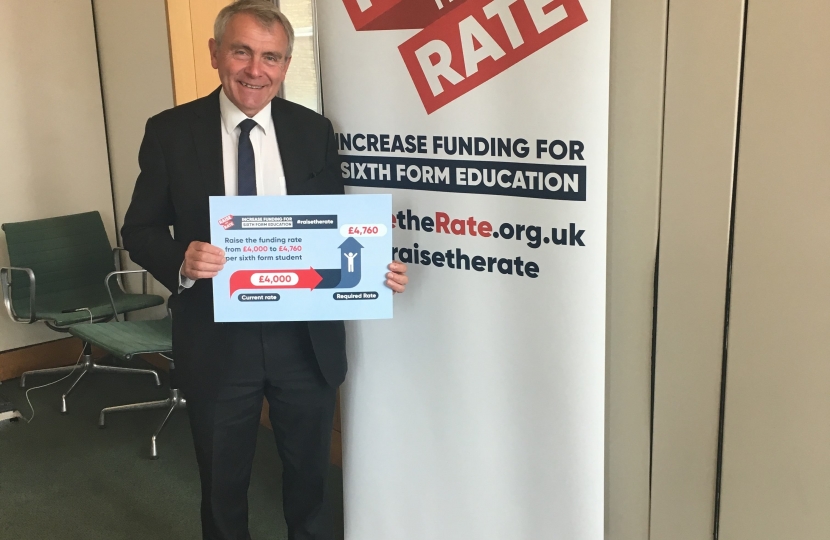 Robert Goodwill MP for Scarborough and Whitby has used his first day back in Parliament to support a national campaign aimed at increasing education funding for 16 to 18 year olds.

Mr Goodwill attended an event organised by the Raise the Rate campaign for MPs that are backing its call for the government to increase the core funding rate for 16 to 18 year old students from £4,000 per year to at least £4,760 per year.

Two deep cuts to sixth form funding were made after 2010 and the funding rate has been frozen at £4,000 since 2013. A recent survey for the Raise the Rate campaign found that funding pressures had led 51% of schools and colleges across England to cut courses in languages and 78% to reduce student support services or extra-curricular activities. Over three quarters (76%) of schools and colleges reported that the funding they are due to receive this year will not be sufficient to provide the support required by disadvantaged students.

Last week, Robert Goodwill joined a cross-party group of 93 MPs in signing a letter to Chancellor Sajid Javid urging him to increase the funding rate. On Saturday, the government announced that it would do so in today’s (Wednesday’) spending round, but the increase is likely to be around £200 per student - well short of the £760 per student boost that Robert Goodwill MP, the Raise the Rate campaign and Parliament’s education select committee is calling for.

“I’m supporting the Raise the Rate campaign to ensure that the excellent school sixth forms and colleges in Scarborough and Whitby  receive the funding they need to deliver a world class education to our young people.  The funding announced by the Chancellor today is welcome, but it falls well short of what is needed.