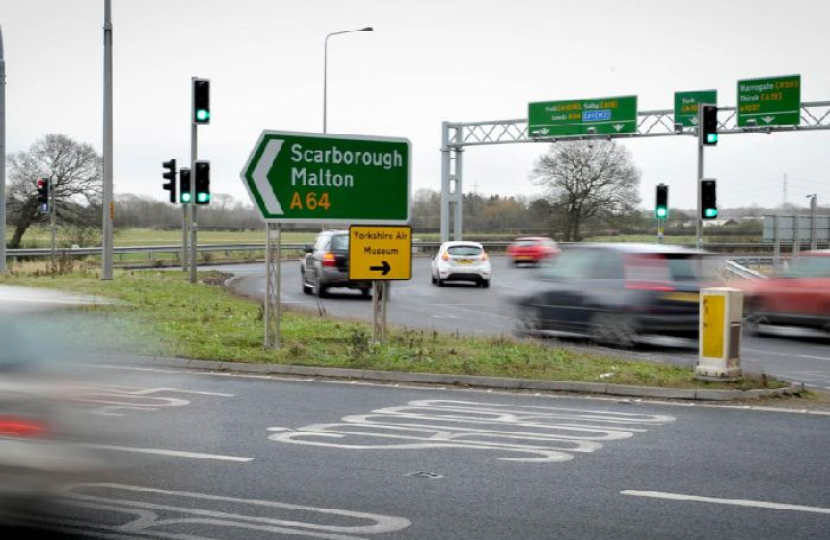 A new campaign is being mounted to get the go-ahead on the building of the £250m dual carriageway on the A64.

It comes as the trunk road carries its heaviest traffic of the year with the peak holiday season.

The ambitious scheme to dual the major stretch between the Hopgrove roundabout and Barton Hill has been on the drawing board for several years and been close to being given the green light on numerous occasions.

Now the high-powered A64 Growth Partnership Group, Thirsk and Malton MP Kevin Hollinrake and Ryedale Council Leader Cllr Keane Duncan have held a key meeting at the Kingspan headquarters at Sherburn to challenge Highways England, the Government's agency for trunk roads, to devise a plan to ensure funding for the dualling is secured from the Department of Transport when it announces its transport investment priorities in the autumn.

Chaired by Cllr Duncan, the meeting heard that Mr Hollinrake was being supported by fellow North Yorkshire MPs Robert Goodwill (Scarborough and Whitby), Julian Sturdy (York Outer), Nigel Adams (Selby and Ainsty) and Sir Greg Knight (East Yorkshire), who have asked Highways England why the assessment of the need and value for money of the improvements has gone from medium to low ranking, said Cllr Duncan.

Highways England has said that detailed analysis of the costs have shown that they are "expected to be much higher than originally expected", adding: "It has become clear that the likely cost of a scheme that would deliver the identified benefits has significantly increased".

This, says Highways England, is due to more extensive earthworks, the high risk of archaeological finds and the need for additional grade-separated crossings to maintain safety. .

"As a result of these likely cost increases, Highways England now assesses the benefits to cost ratio of the A64 Hopgrove scheme as between 1 and 1.5."

Mr Hollinrake said: "I am very disappointed with the current position of Highways England. The facts speak for themselves - dualling the stretch of the A64 between Hopgrove and Barton Hill would transform the economic fortunes of Ryedale and the Yorkshire Coast."

He added that he would be meeting with his fellow MPs and ministers as a priority.

Cllr Duncan said: "Ryedale's prosperity hinges on improvements to this key piece of infrastructure on the A64 but sadly time is running out to secure the funding to make it happen. We have a three-month window to make the case to the Government or we could miss out on funding for half a decade. The partnership is working as hard as it can over the next few weeks to finally dual the A64."

Mr Goodwill, a former Transport Minister and a long-standing campaigner for improving the A64, said: "Dualling this increasingly important road is vital. It carries heavy traffic throughout the year, and upgrading it is key to attracting new investment on the Yorkshire Coast. The scheme has widespread support through the Scarborough and Ryedale area, especially from the business community."