Scarborough and Whitby Conservative candidate Robert Goodwill: 'Why my party is the only one to trust in this election” 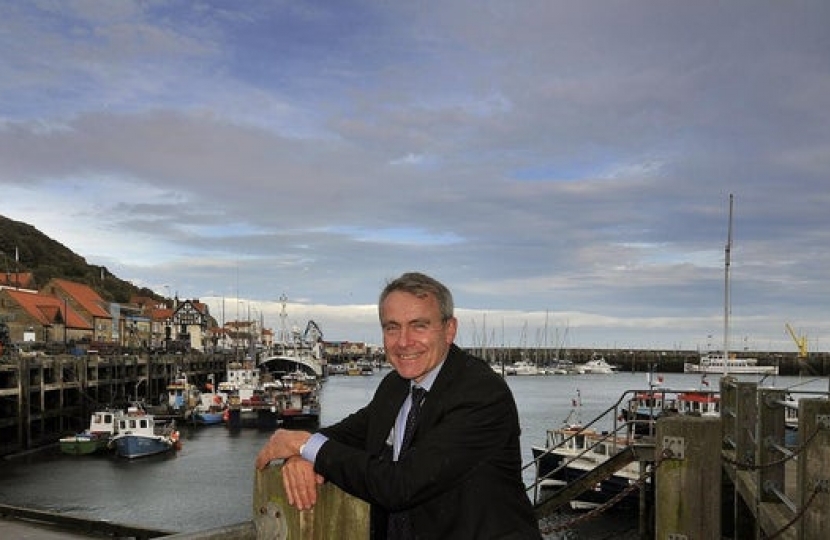 Ahead of this year's General Election The Scarborough News has been speaking to all candidates fighting for the Scarborough and Whitby seat on December 12.

Today, we focus on Mr Goodwill, who has been the town's MP since 2005.

Brexit: What’s your stance on Brexit, and what impact do you think it will have on the borough? How do you intend on resolving the current impasse while making sure the will of the people is respected?

Robert Goodwill: "It is three and a half years since the people of Scarborough and Whitby voted decisively to leave the European Union. We must stop wasting time and respect the democratic will of the people. The Prime Minister’s deal does genuinely implement that historic decision – even Nigel Farage recognises that, which is why the Brexit Party isn’t fielding a candidate here.

"The deal also protects jobs in vital industries such as agriculture, services and manufacturing and will allow us to negotiate a free trade deal with not only Europe but with other trading blocs around the world. We will become an independent coastal state with full control of our fish stocks. All Labour can offer is more delay and confusion with another referendum in which they can’t even decide which side they would be on. Only the Conservatives can get Brexit done!"

Climate change: Scarborough Council, which declared a climate emergency earlier this year, has a target of making the area carbon neutral by 2030. As an MP, what steps will you take to ensure concrete measures can be brought in for Scarborough and Whitby?

Robert Goodwill: "Climate Change is the challenge of our generation. The UK will host the COP 26 in Glasgow next year and we already lead the developed nations in reducing greenhouse gas emissions. These are down by around 40% compared with 1990 levels. We no longer rely on coal for electricity generation with a target of phasing it out completely by 2025. We must redouble our efforts to meet our net zero target.

Locally, we certainly need to do more. A good start would be to increase the number of electric vehicle charging points. Each of us can play our part by making greener choices in our everyday lives such as reducing food waste."

Low paid jobs: Recent research from the BBC shows that people working in coastal towns are paid on average £1,600 a year less than people inland. As an MP, how do you plan to address the issue of low paid jobs which is driving young people away?

Robert Goodwill: "We need to continue upskilling our workforce and attract more high value investment and employment opportunities to the area. Nationally, over 3.8 million apprenticeships were started between 2010 and 2018 including 8,290 in this constituency. We have amazing employers delivering apprenticeships and training centres like the Construction Skills Village in Eastfield. We have 270 more businesses in the constituency compared to 2010 and unemployment has almost halved. Companies like Plaxton and McCain have invested heavily. We need to raise young people’s aspirations with employers showcasing the opportunities available locally – particularly in the health and social care sector."

Transport: With the A64 still waiting to be upgraded, and rail services unreliable, many feel that unless something is done “we will be left behind”. What are your plans to improve our transport links?

Robert Goodwill: "This area has suffered for many years from poor transport links. The A64, particularly between Hopgrove and Malton, is in desperate need of upgrading. I am pleased that the first element of this work has been included in the Government’s Road Investment Programme. I will spare no effort to ensure that this project stays in the programme and is delivered.

"The rail connection between Scarborough and York has been unreliable and overcrowded. The timetable changes in 2018 caused widespread chaos. Network Rail has learned from these mistakes and after a few teething troubles the new timetable is functioning well. Trains arriving late in Scarborough no longer result in delayed departures as the previously arrived train takes the next service. TransPennine have now introduced the new Nova trains, costing £6 million each, with 100 extra seats. Next year Northern Rail will introduce its shuttle service to York on the half hour which will double the frequency of trains."

Robert Goodwill: "Like you, my family relies on the NHS. It is our most precious national asset. The NHS budget will go up by £33.9 billion by 2023-24. The biggest cash boost in its history. The long awaited £12 million redevelopment of Whitby Hospital has been given the green light – banishing fears of closure. Health Secretary Matt Hancock, on a recent visit to Scarborough Hospital, has confirmed that Accident and Emergency will be transformed with a £40 million Combined Emergency Assessment Unit. This innovation will bring medical and surgical services to the front door. I lobbied ministers ahead of the introduction of the new funding formula which recognises the challenge of delivering services in remote, rural and coastal hospitals which will give us a fairer share of the budget. York Trust must deliver on its promise of returning services like breast oncology clinics to Scarborough. This change was down to staffing problems, not money."

Mental health: Scarborough has the 8th highest suicide rate in the country. What will you do to improve local mental health services?

Robert Goodwill: "Alongside the record funding we are giving mental health services, we are making sure that, by next year, every patient who arrives at A&E in England with a mental health emergency will have instant access to psychiatric help. Scarborough Police Station now has its own “place of safety” for offenders detained under section 136 of the Mental Health Act obviating the need to transport them to York. The UK’s first Minister for suicide prevention leads a task force aimed at reducing suicide rates. Since September, all schools and colleges are being offered mental health training as part of our commitment to giving mental health the same priority as physical health."

Social care: Social Care campaigners are asking for better funding, incentives to encourage providers to invest and measures to recognise the work care workers and unpaid carers do. What will you do to support this call?

Robert Goodwill: "The Prime Minister’s commitment to fix the crisis in social care once and for all is not in doubt. Boris has put an additional £1.5bn into social care and has made clear that no-one should have to sell their home to pay for the cost. The Care Act 2014 introduced important new rights for carers giving them a legal right to be given support when eligible and £130 million has been made available each year for Carers’ Breaks."

Education: Children in coastal schools achieve on average two and a half grades lower at GCSE than their inland peers, according to research by the Department for Education. What will you do to narrow this gap and support our schools in the Opportunity Area?

Robert Goodwill: "We are increasing school funding by £14 billion with those areas historically underfunded like ours receiving the greatest increase through the fairer funding formula. Each secondary school pupil will receive a minimum of £5,000 next year, and each primary school pupil will receive £4,000 by 2021-22, meaning that every child has the resources they need for a good education. Not all the schools in our area are delivering for our children. That is why Scarborough and Whitby was chosen as one of the 12 Opportunity Areas to be allocated £6 million each to raise standards and aspirations."

Trust: Why should voters trust you as opposed to the other candidates? What is your background?

Robert Goodwill: "I live on a farm near Malton where my family have been for over 160 years. Married to the daughter of a policeman, Maureen, we have three grown-up children who all attended the local comprehensive. I have served in Government in several departments and most recently I was the Minister of State for Agriculture, Fisheries and Food. In my spare time I enjoy walking, cycling and steaming up my traction engine!

"It is no wonder that levels of trust in our politicians have plummeted. Empty promises were made by the other parties at the last election to deliver on the result of the referendum. In this election it is only the Conservative Party that can be trusted to get Brexit done. It is only by keeping our economy strong that we can deliver our programme for the NHS, education and the 20,000 extra police we want to put on our streets. Labour are promising the earth but their reckless spending plans just don’t add up."