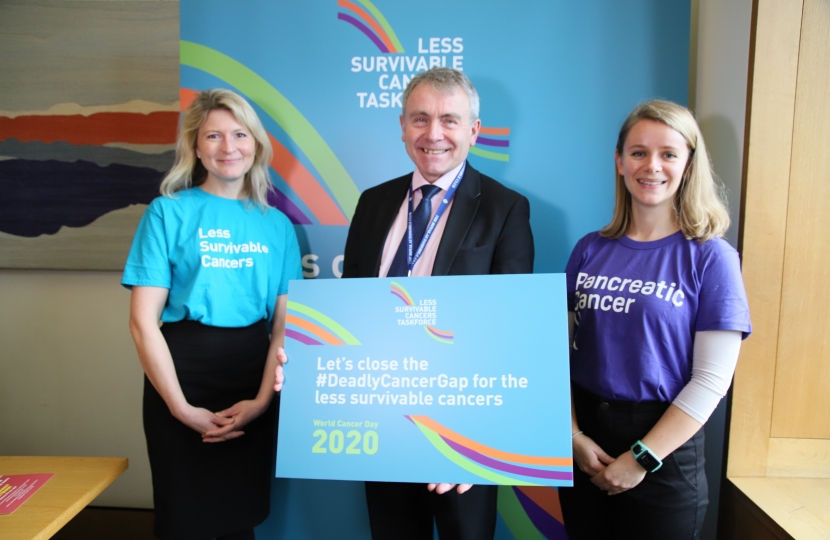 Mr Goodwill is backing calls from the Less Survivable Cancers Taskforce (LSCT) to end a vicious cycle which has seen survivability stagnate amongst the six deadliest cancers over the last decade. Mr Goodwill met charity members of the LSCT in the House of Commons on 4 February to coincide with World Cancer Day.

The LSCT represents six ‘less survivable cancers’, lung, liver, brain, oesophageal, pancreatic and stomach, with an average five year survival rate of 14% due to a legacy of neglect and underfunding. The Taskforce aims to double the survivability of these cancers to 28% by 2029.

At the event, Robert  met with cancer specialists and patients with first-hand experience of these ‘less survivable cancers’. They learnt about the critical situation for people diagnosed with these cancers and the urgent need for a step change in targeted investment in research in order to make much-needed diagnosis and treatment breakthroughs.

“We are delighted that Mr Goodwill MP shares our concerns about the stark inequalities in cancer outcomes.

“There are some cancers which have seen remarkable progress in survivability but others that are just as deadly as they were decades ago. Together, these ‘less survivable cancers’ make up half of all common cancer deaths in the UK.

“Today we are calling on the UK governments to commit to doubling survival rates from 14% to 28% by 2029 and I’d like to thank Mr Goodwill for supporting our campaign to close the deadly cancer gap.”

“Every year, thousands of people diagnosed with a less-survivable cancer, including those with brain cancer, are denied even the hope of a cure. Many are told they have only months to live. That has to change.

“We need more research and a committed drive towards improving survival for these cancers, so that fewer lives are cut brutally short and fewer families are left devastated by loss.”