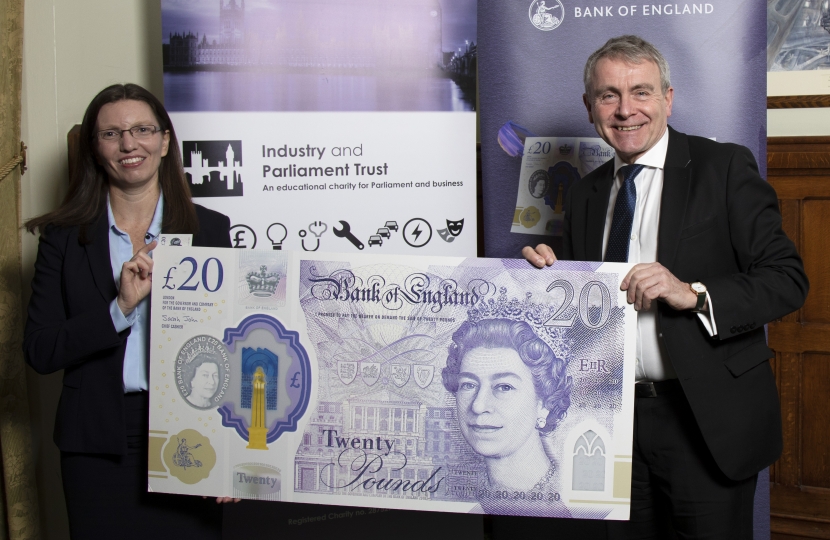 Bank of England staff were on hand to talk through the new security features incorporated in the note which make it very difficult to counterfeit. On the front, the see-through window contains a two colour foil in gold and blue, celebrating Margate where Turner drew inspiration for over 100 of his paintings.

It is the first Bank of England note to contain two see-through windows, with a small one in the bottom corner inspired by Tintern Abbey. The note has various foil patches and a hologram which changes from the word “Twenty” to “Pounds” when the note is tilted.

Mr Goodwill said: “I was delighted to be among the first to see the new £20 note and learn more about its security features. I would recommend that businesses in our area and anyone who regularly handles cash takes a look at the Bank of England’s website to find out how to check banknotes so that they know what to expect when the new note enters circulation on 20 February.”

Sarah John said: “The new £20 is an important part of our commitment to providing banknotes that people can use with confidence.  Our polymer notes are harder to counterfeit and, with the £20 being our most common note, this marks a big step forward in our fight against counterfeiting.  I hope the public will look forward to spending their new Turner £20s.”

The note will be issued on 20 February 2020, so the public here in Scarborough and Whitby will begin to see them in the following days and weeks as they are stocked in ATMs and tills.

Paper £20 notes, featuring Adam Smith, will remain legal tender and should be spent and accepted as usual. These notes will be gradually withdrawn as they are banked and notice will be given six months ahead of legal tender status being withdrawn.