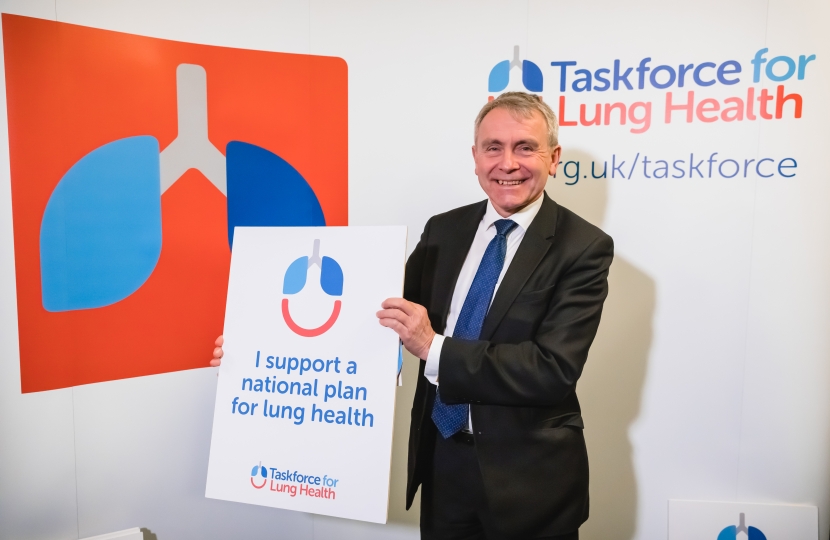 Every five minutes, someone in the UK dies from lung disease. Respiratory disease is one of the top three killers in the UK after cancer and heart disease. Despite this, there haven’t been any improvements in the number of people dying from lung disease in over a decade.

Robert Goodwill MP is urging the government to formally support the Taskforce for Lung Health’s five year plan so that everyone with a lung condition gets the best possible support and care. The Taskforce is a unique collaboration between patients, healthcare professionals and charities, who last year published the first ever national plan to improve lung health in England.

By supporting the Taskforce, Mr Goodwill is hoping to drive improvements to lung health locally and nationally. Currently, around one in five people live with a lung condition, but lung disease has been overlooked and under prioritised for many years. Compared to other countries, we diagnose lung disease much too late. And then, we fail to provide the most effective treatments to everyone who needs them.

It’s vital we change the way we care and support people with lung disease. Mr Goodwill  is committed to supporting those in Scarborough and Whitby who are affected by respiratory disease. Preventing more people from developing a lung condition in future is also crucial, by investing in stop smoking services and tackling air pollution.

The Taskforce is already seeing success and welcomes the NHS Long Term Plan making respiratory disease an official priority for the first time. While progress has been made, there is still a lot to be done. For example, the Taskforce has proposed a new diagnostic pathway for people with respiratory symptoms should be adopted by the NHS, which would mean more people can begin treatment earlier. To keep track of improvements, the Taskforce has published an update on the progress made so far and a new lung health data tracker.

Mr Goodwill said: quote to be inserted here about why you are committed to standing up for people with lung disease locally and why you urge government to implement the Taskforce’s plan