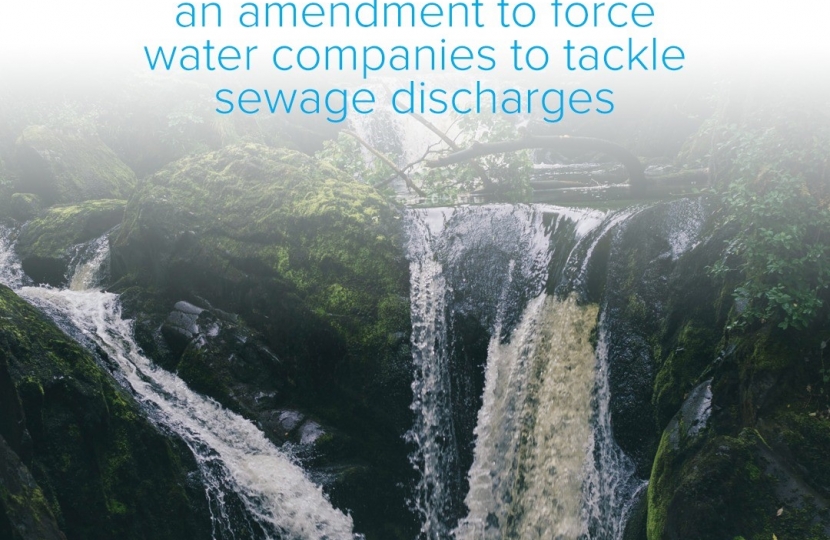 I am pleased that I have added my name to the proposers of the amendment as did Philip Dunne whose Private Members Bill initiated this whole debate.  The Duke of Wellington’s original amendment was taken from Mr Dunne’s PMB.

I outline the main points from Mr Dunne's statement below, which I support:

- There has been a wholly exaggerated and misleading social media campaign against colleagues who either supported the Government or who had abstained, claiming this meant MPs had voted to allow water companies to continue discharging sewage into our rivers.

- Last week the Secretary of State George Eustice and Environment Minister Rebecca Pow met with Mr Dunne to consider the text of the Government Amendment in Lieu, which had been referenced by Lord Goldsmith, seeking to ensure there was a legal duty on water companies to progressively reduce the adverse impact of sewage discharges. This is what the amendment provides for, requiring water companies to reduce the impact of sewage discharges on the environment and public health (the latter being new and important for example for wild swimmers or canoeists).

- The reason this will work, contrary to the claims of campaigners, is that it dovetails with the existing provisions in the Environment Bill for each water company to produce a statutory Drainage and Sewerage Management Plan every five years, which will set out how such reduction in sewage discharges will be achieved and funded.  There is also a power of direction for government to direct water companies in relation to actions in those plans if they are not good enough.

- Campaigner claims that the amendment weakens existing legislation are wrong. The water companies have an existing Section 94(1)(b) duty to treat sewage “effectually”, which has existed since 1991, and the new amendment does not replace nor override this duty.

- The problem has been that EA/OFWAT have failed to use their existing section 18 powers (which remain and which provide the enforcement mechanism for this new duty) to enforce that duty over the last 30 years.

- The onus is now on DEFRA to give improved strategic guidance to Ofwat (due in January 2022) to require increased capital expenditure on water treatment in the next 5 year Pricing Period (2025-2029).

- It might be helpful to offer one example of the scale and timeframe which can be involved in the largest sewage infrastructure schemes:

Thames Water got planning consent for the Tideway Tunnel in 2014, construction commenced in 2016, completion into service is due in 2025. This is costing some £4.6bn, will be paid for by adding £19 per annum to each household bill in London. It will remove 37million tons of sewage out of the 39million tons legally dumped into the Thames by Thames Water.